I had a lot of fun making my 'Hunt for Red Santa on Groundhog Mountain' image.  I call it an 'image' because I feel that the term 'photograph' is giving it too much credit.  It is a composite of multiple photographs to capture the entire scene.   And if you read my original post you would also agree that if one was to hunt Santa, this would be the place! 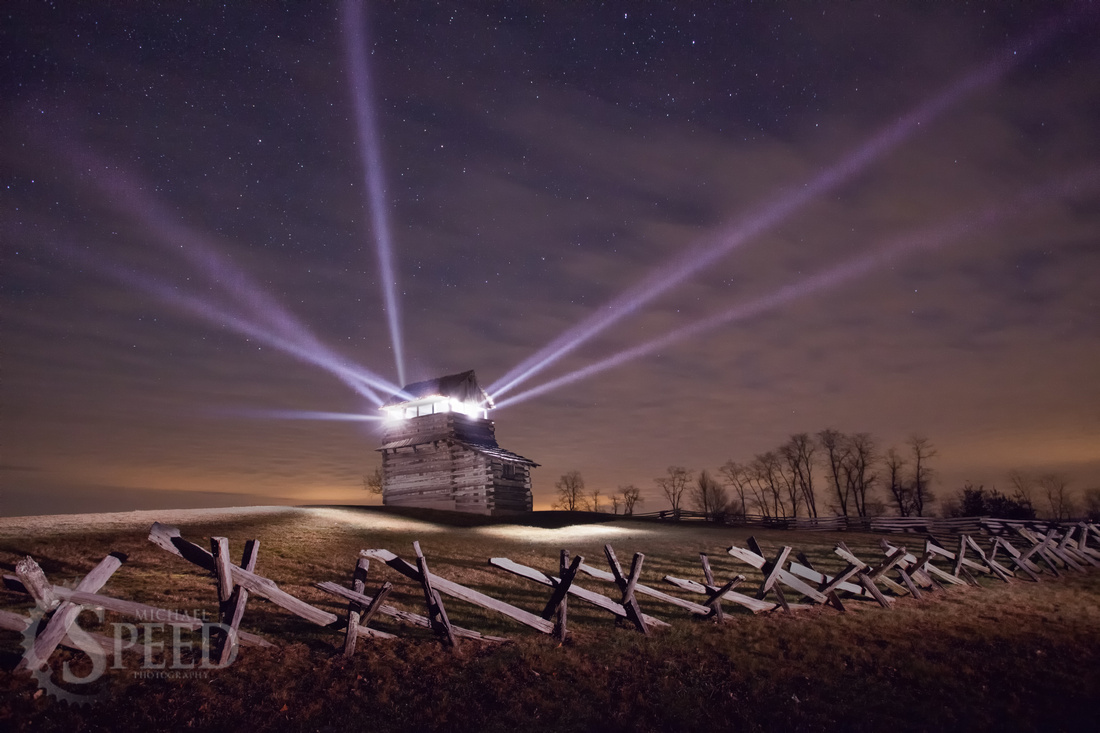 The first thing I will mention about this, is that I was having trouble sleeping and left my house at around 3:30am.  Groundhog Mountain is only 25 minutes or so from my house, so I was set up and shooting by 4am(and back in time to have breakfast with my wife:)

I came here a week or so prior to this and tried making a scene like this with my mag light. 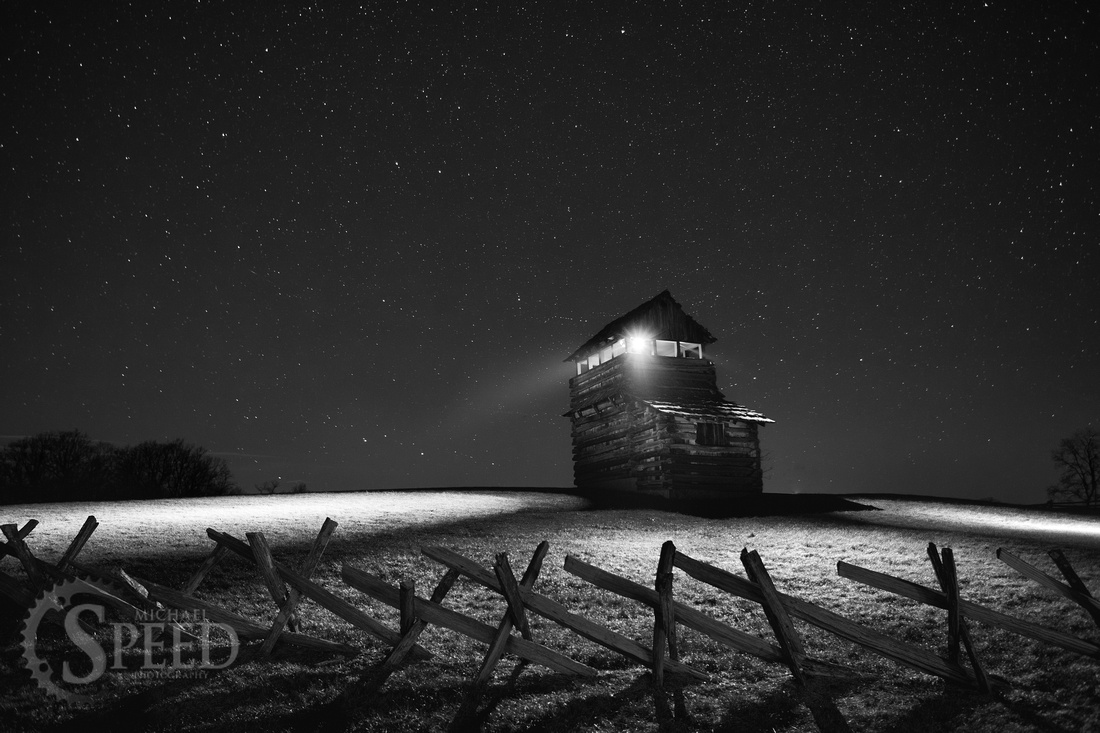 Nightscape at Groundhog Mountain.Night time scene on the Blue Ridge Parkway in Virginia.

The problem I run into the most is how 'cool' the light of the Maglight is compared to a nighttime scene.  I have yet to use gels to fix this problem, so that is why I chose a black and white finish for this image.  Not only was the temperature of the unfiltered LED Maglight an issue, the particular Maglight that I had purchased was more suited for campground stuff, not near powerful enough to create big beams of light.  Enter the spotlight!

It's even CAMO!  And I was intruged by it since it came with both a car charger and a wall charger.  That way I could hide my purchase from my wife by charging it in my car!  GENIUS!

I chose this spotlight because of the word HALOGEN!  Halogen lights are very much NOT the rage anymore, LED technology has all but erased them from the scene.  I like the halogen because of its warmer beam.  But like everything, there is compromise.  Halogen lights are a pain to filter, where LED is almost pure white so filters work really well on them.  This is still a decision in progress, but for this scene I was was more than happy to have a warm light that I could cool down to match my scene better.

I started by using the Live View to compose my scene.  I started by placing the fence at the bottom, and used the view finder to compose the left-to-right.  Since I couldn't see the fence, but could see the sillouhette of the tower and night sky.

I chose f7.1 for my fence.  I did this because of the closer focusing distance, and because the light was like, WAY powerful! I played around a bit with how low I could go for my ISO and ended up with this foreground... 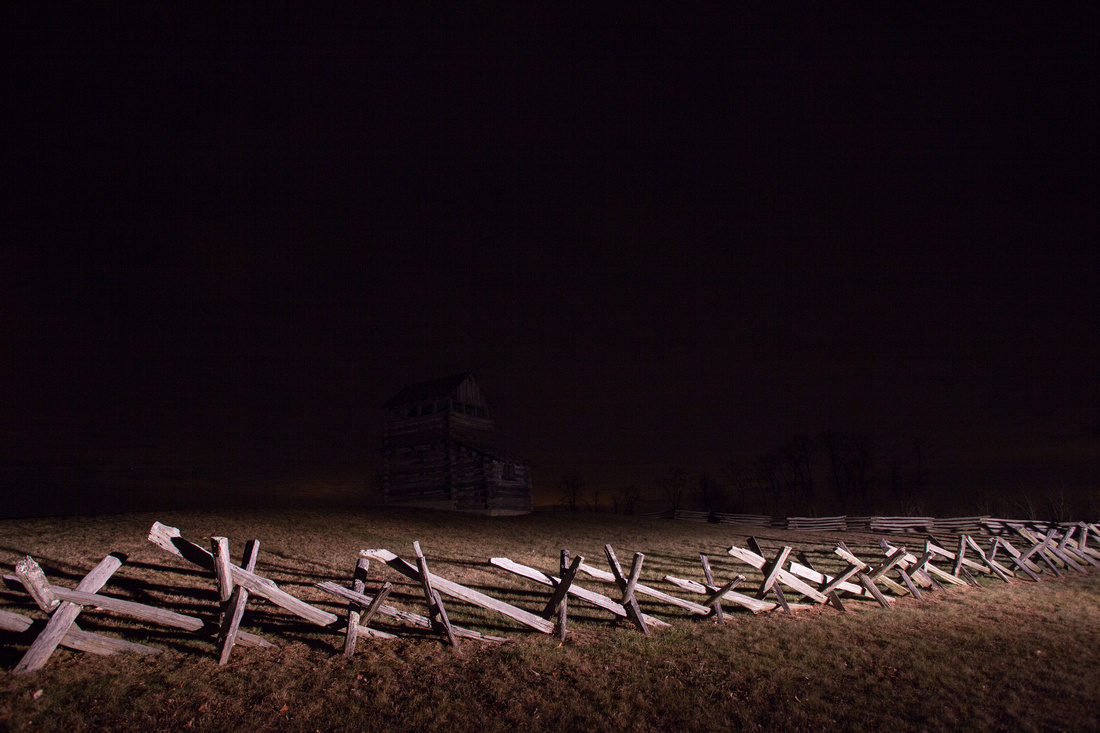 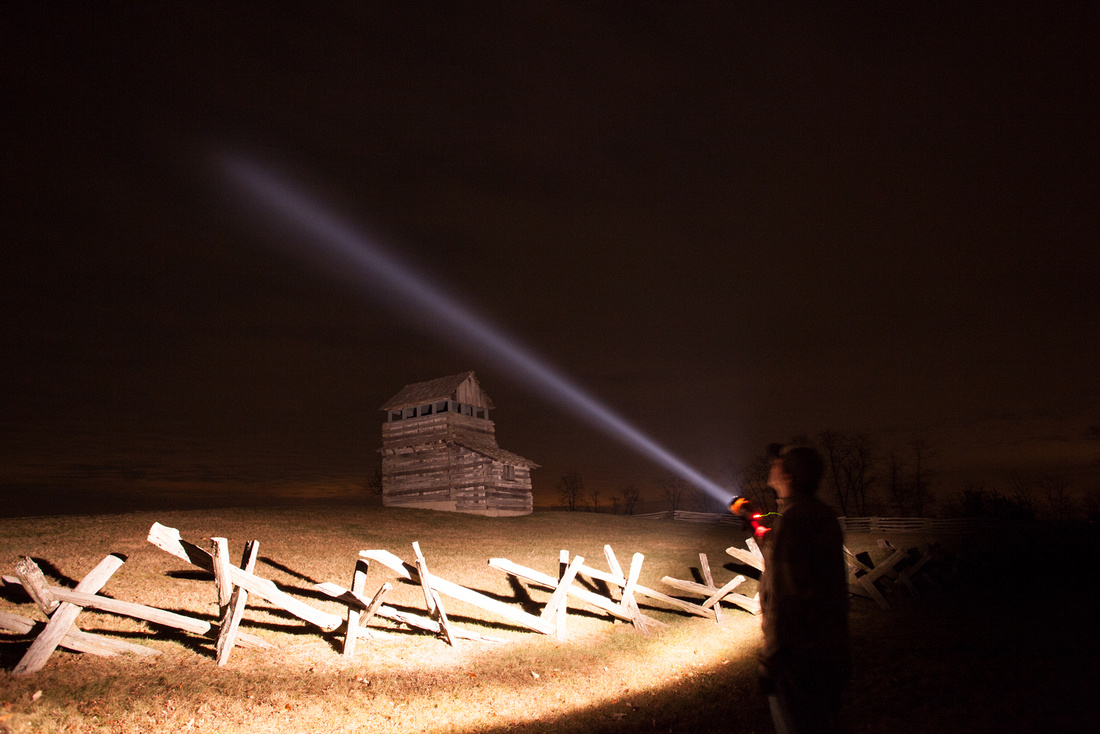 Photographer testing out brightness of light

After this, I used the Magic Lantern to have my camera shoot continuous 30 second exposures, and headed up into the tower.  There was a touch of wind, but I was able to hear my camera's mirror lockup during the 2 second timers.  This gave me the heads up to change positions. 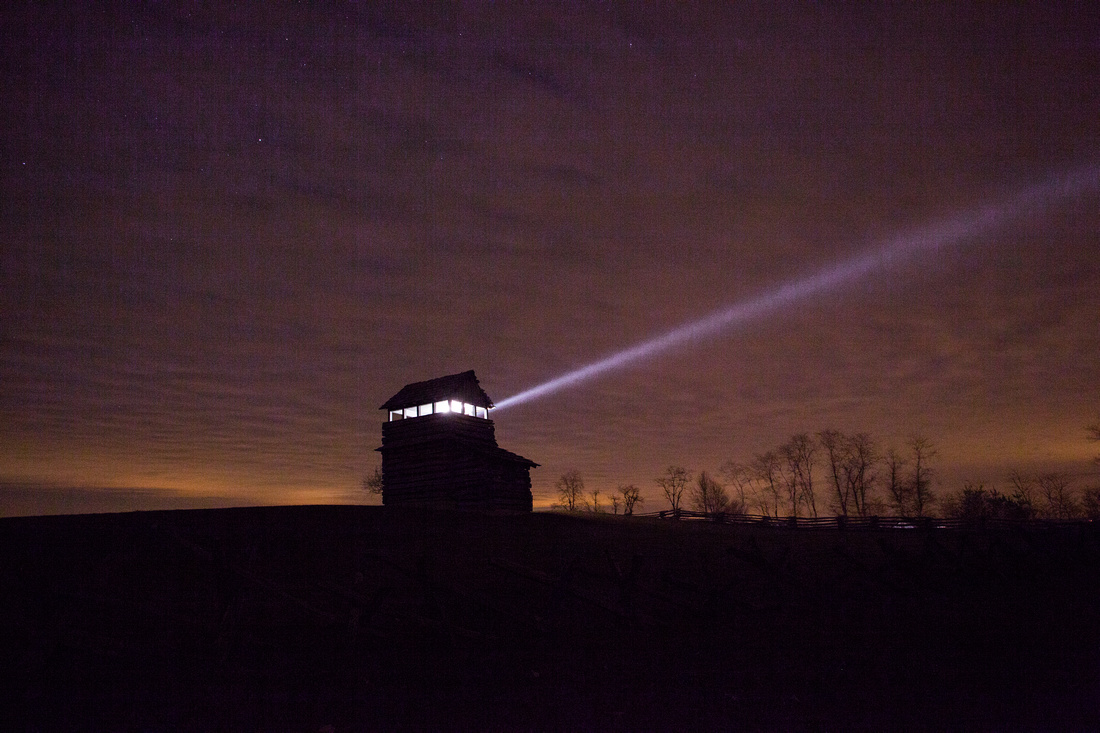 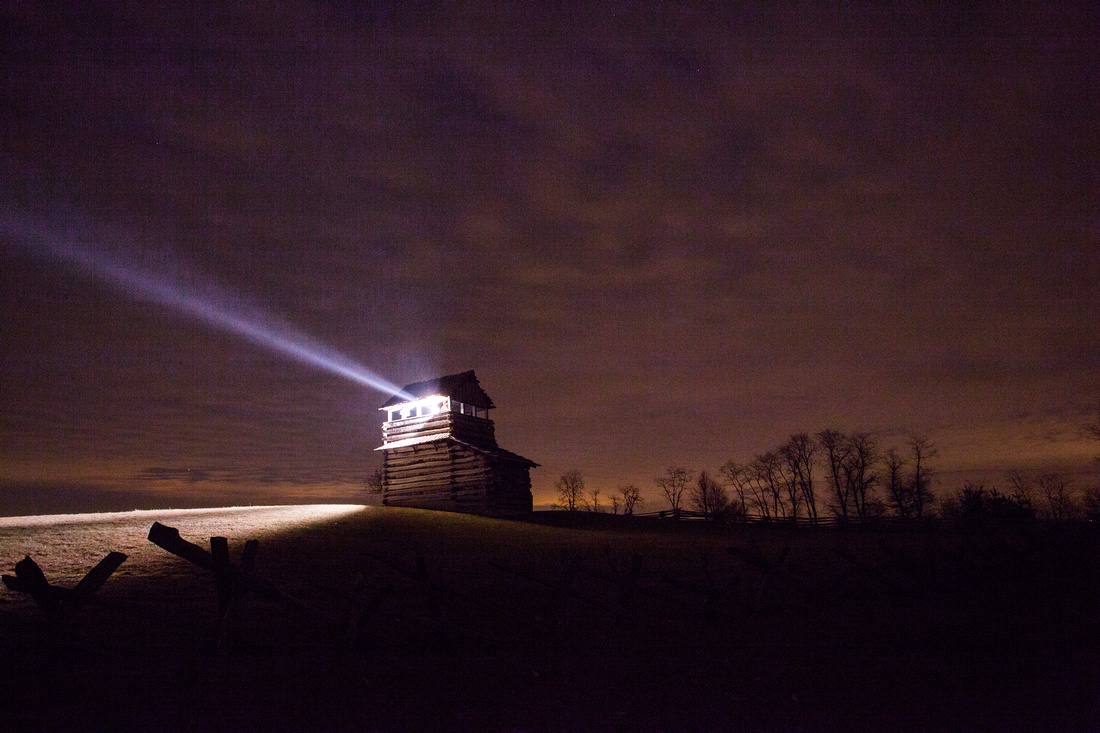 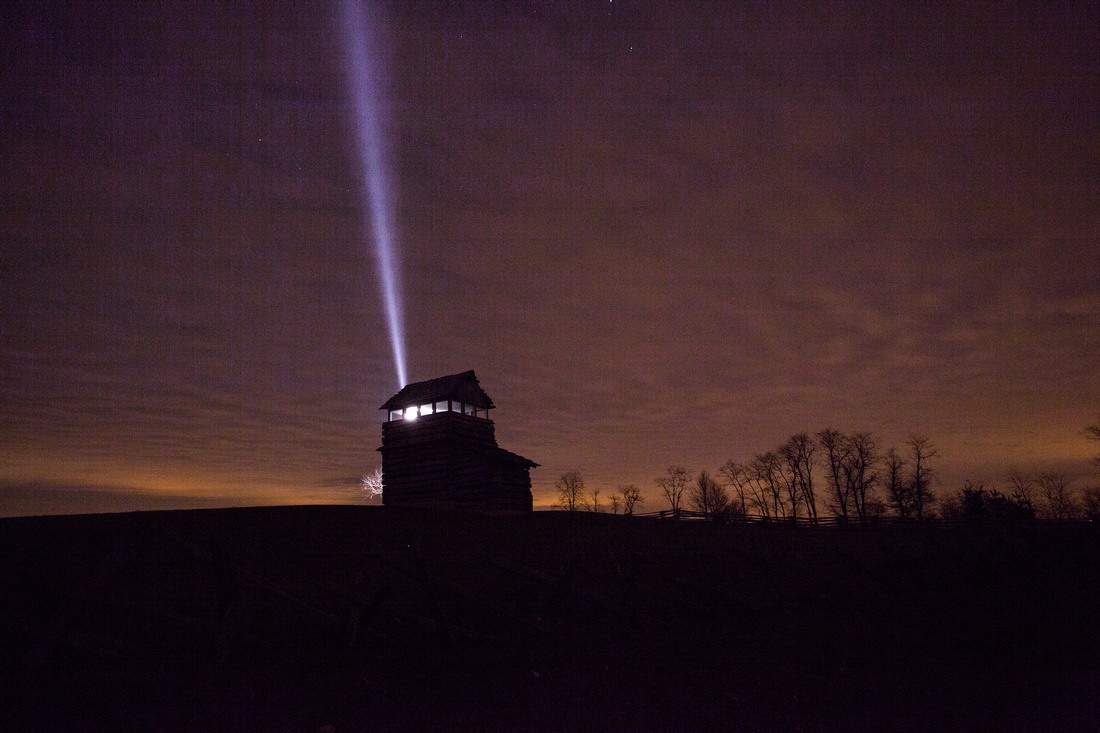 I took several of these over the next half hour or so, coming back to the camera every now and then to look at which angles still needed to be covered, along with checking brightness/exposure settings.

After I had captured the beams to satisfaction, I shot an exposure to fill light in on the tower itself, and then shot one for the stars. 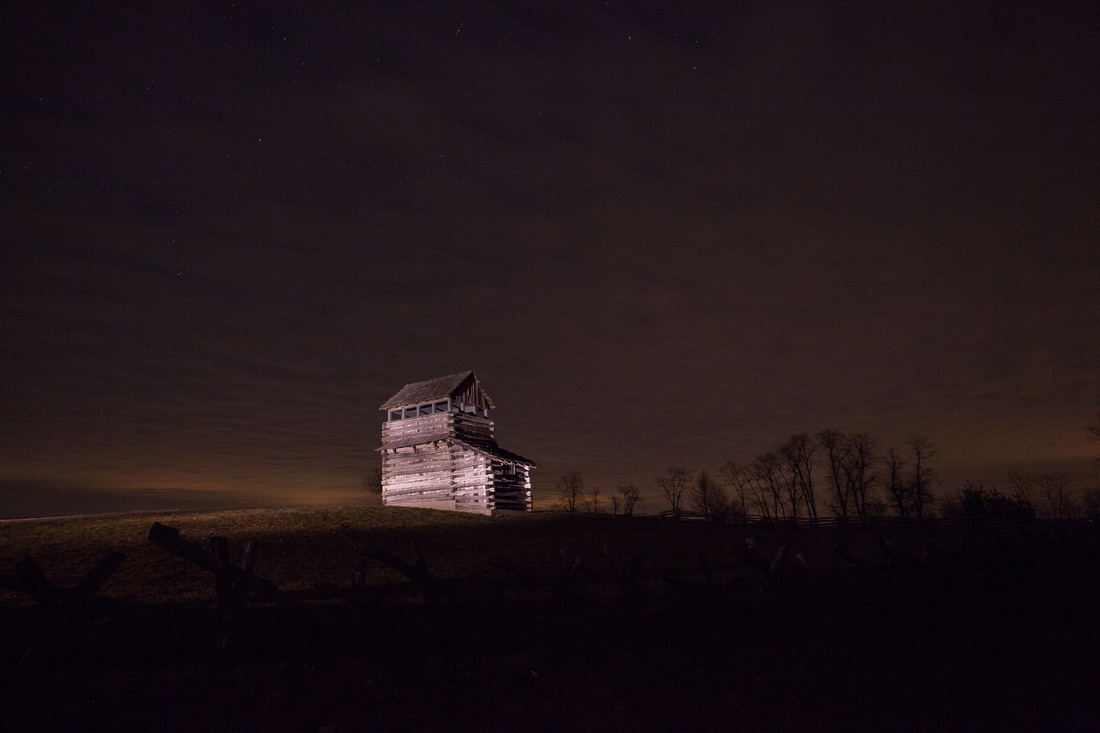 I ended up waiting a fairly long time for some of the clouds to clear out and show some stars, but at 5 in the morning I didn't have much else to do. 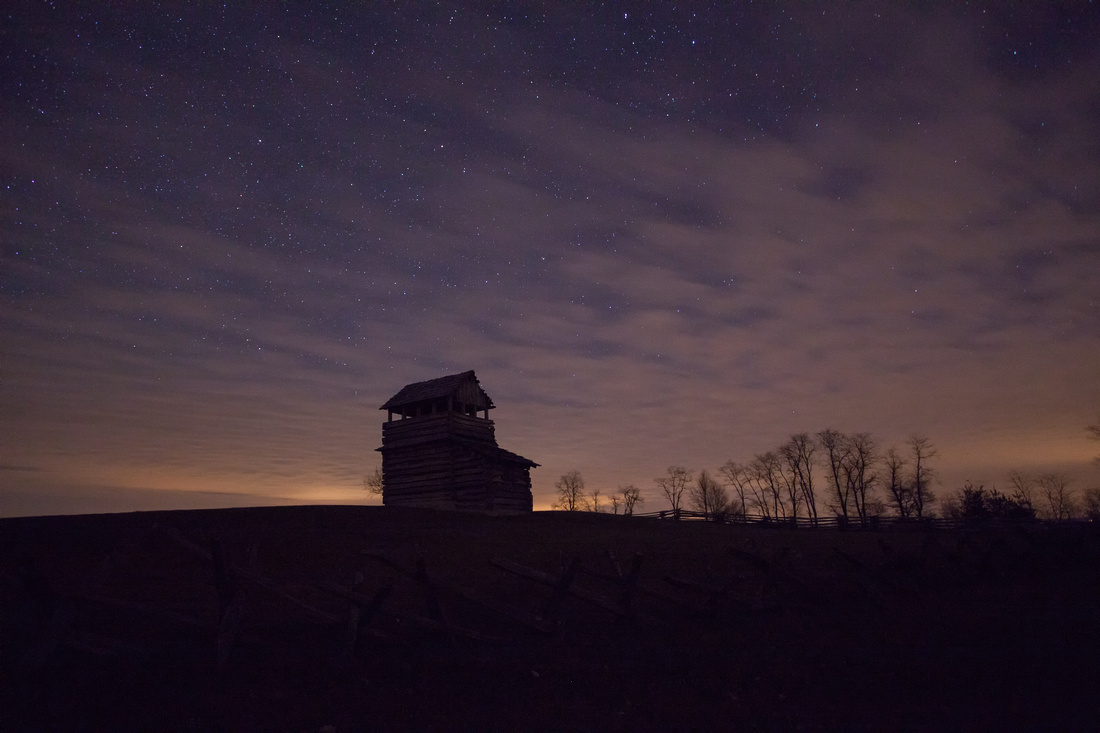 The warm halogen light made blending all of these images very easy.  I was able to set them all to the same white balance in Lightroom, and then use the Gimp to blend them all together using the 'lighten only' layer mask.  Choosing 'full transparency' when adding the mask made this process super fast.  The stars only image was noise-reduced immediately, as that is the most effective way (even real photographers agree), see this link from Kevin Adams Digital After Dark blog on Long Exposure Noise Reduction.  I should have reduced the noise in the other images as well, but to be honest, while I enjoy the results of the Nik Dfine Noise Reducer, I don't like opening up plugins.  So the final image got just a touch of noise luminance reduction in Lightroom 5.

Thanks for looking, if you have any other questions about this post or about photography in general, feel free to comment on this blog or shoot me an email at [email protected]