Well worth the trip... 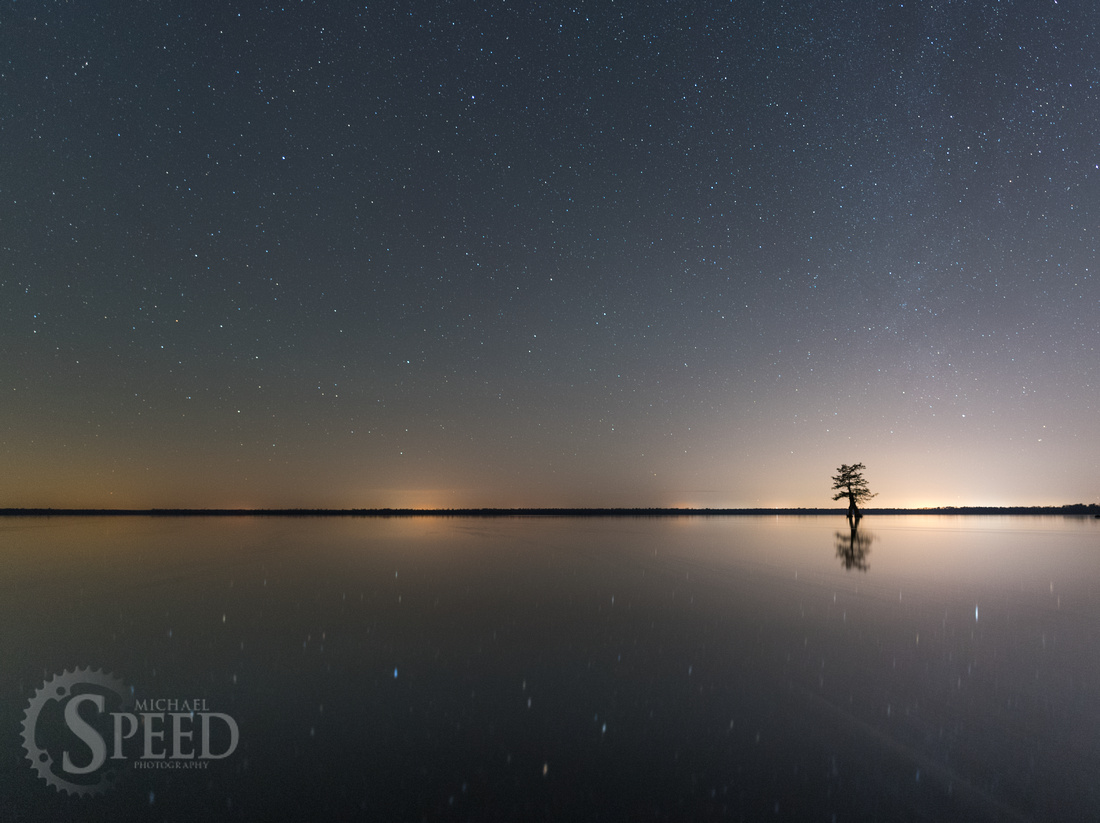 At the beginning of my blog posts is normally where I will post my favorite photo of the trip.  This time around, I had a hard time selecting one, as I like many from my recent voyage to the Great Dismal Swamp.   Read on for more...

It is just over 5 hours of driving to get to the boat landing at the Great Dismal Swamp from my home near Galax, Virginia.  It took every inch of my being not only talk myself into making the drive, but to keep driving as I made my way.  For some reason I kinda just wanted to stay home and be near the wife(you married men who love your wives know what I'm talking about), but I had spent time preparing, and this would be my last long distance photo trip for a while(this is my busy work season), so I might as well go and enjoy myself.

As always, I get to the places I am going at the last second, and today was no different.  I showed up about an hour before sunset, which meant that by the time I paddled the 3.5 miles or so to the campsite, it would be pitch black.  The same thing happened the last time I came!  This trip, there was pretty thick cloud cover(I could hear helicopters flying somewhat low overhead but could not see them) and that made the dark of night seem to come on even sooner than expected.

In the photo below, taken as I was about to pack up the following day, you can see I set up my tent near the tram.  The tram is a cable driven platform that runs along a short set of rails to help people move their boat from the feeder ditch to Lake Drummond.  To the extreme right of the photo, you can see the lock, which keeps a proper lake level.

The tram was out of service since they are doing some construction at the lock(those photos further down).  This wasn't a big deal since I normally just pull my kayak over the grass. 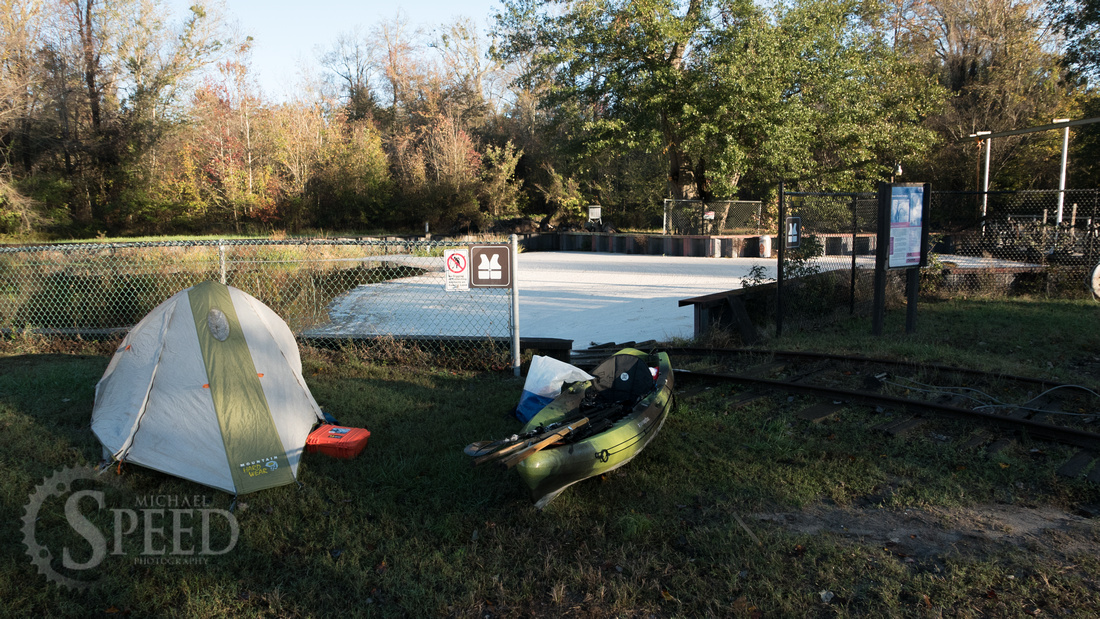 I was feeling a bit restless in the middle of the night.  Part of it was that I have a really bad sleeping bag, and the other part was that I was curious if the weather forecast would hold true, that the sky was supposed to clear.  I rolled out of the tent around midnight and was really happy to see stars!  I decided to take a little trip out to the lake for some night sky photography.

You basically point your kayak at the center of the 'v' made by the black trees on the side and the starry sky in the center.  I try to use my headlamp as little as possible to keep my eyes dilated.  About halfway out to the lake, I was startled by a HUGE SPLASH not but a few feet from the boat!  The closest thing I can think of it sounding like was a beaver tail slap, but I don't even know if there are any beavers living in the swamp(which means the only other thing it could be was Bigfoot throwing a rock in at me!).  Either way, it scared me pretty good!(and I'm really glad he missed)

Once I got out to the lake, it was like I was kayaking in another world!  The stars were reflecting so beautifully off of the water it was simply wonderful.  I would park my boat near trees or stumps to start setting up the camera, as the wind was really pushing me towards the edges of the lake. 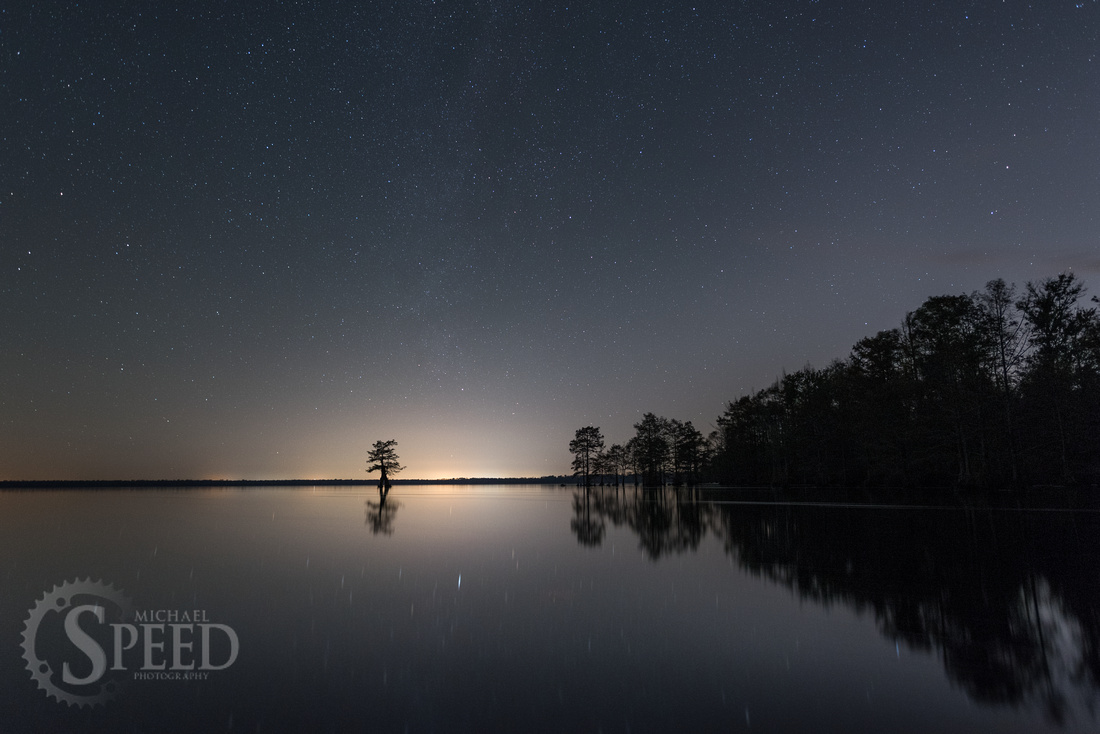 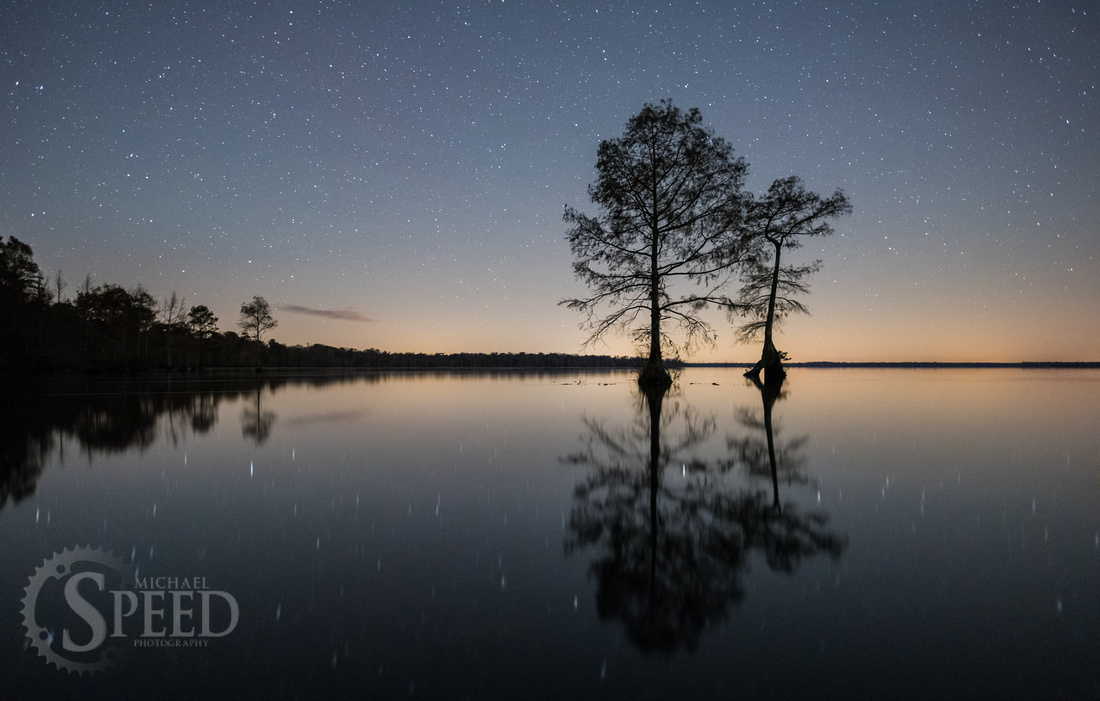 I paddled out a little ways towards the lone tree seen in the first couple photos. 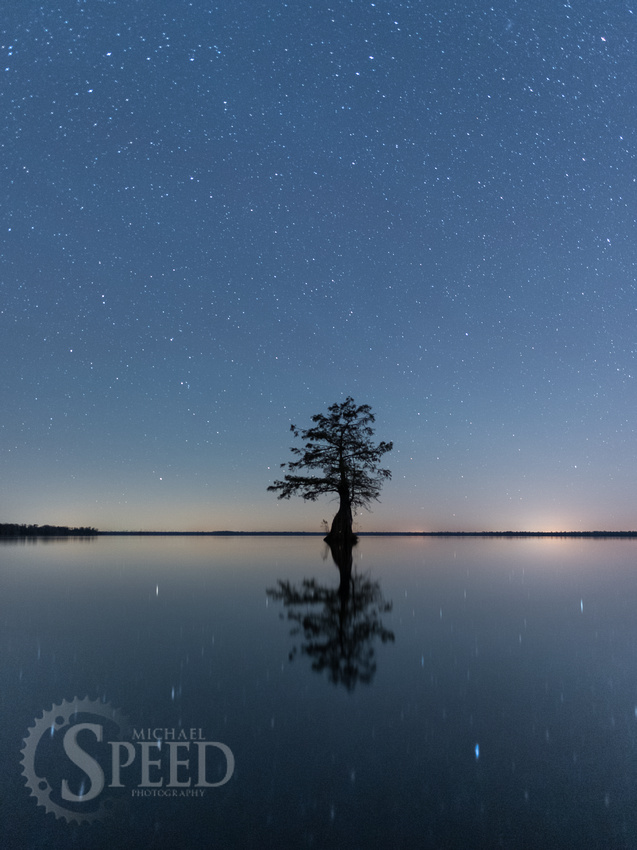 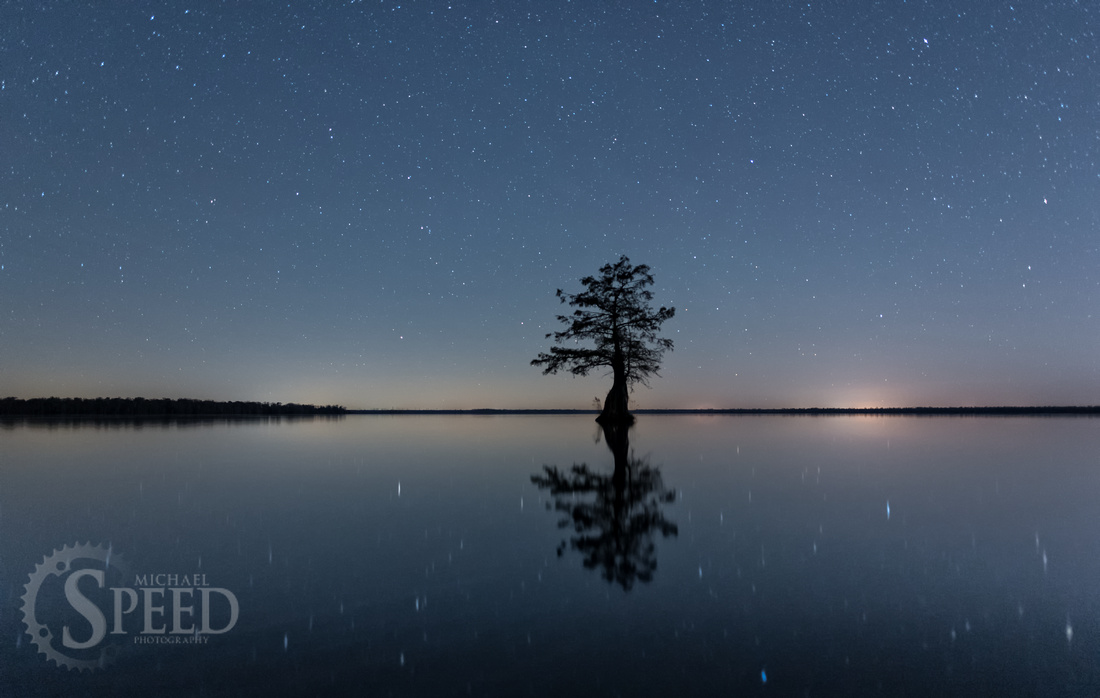 I was getting a little chilly after being out on the lake for a little bit(i was still wearing shorts!) and I was yawning quite a bit so I headed back to catch some Zs before sunrise.

By the time my alarm went off, the temperature had really dropped a bit.  It wasn't freezing cold by any means, but chilly humid air can make you shiver in the shade!  It was kinda hard for me to get out of the tent and into the boat, but I only came here to take photos, and I would be pretty stupid to sleep in!  So at just after 5 I hit the water again and made my way out to Lake Drummond again.

In my first photo you can see a few stars still shining in the morning light. 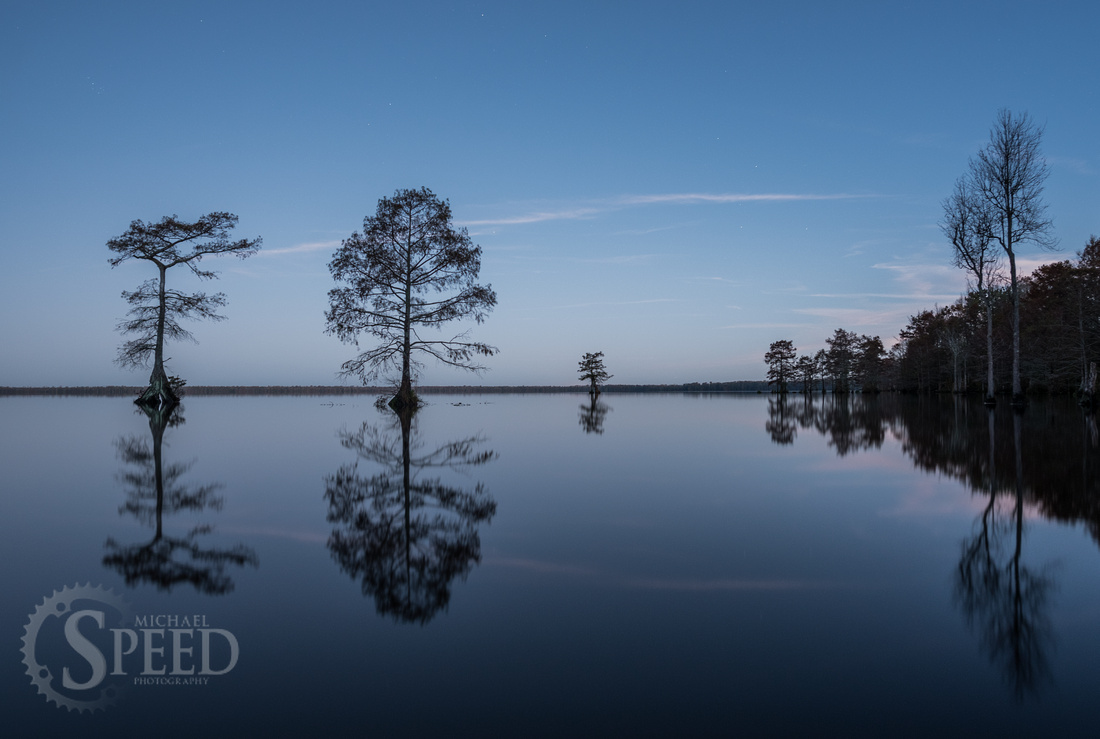 The below photo was taken after the stars went away, but before the sky was really starting to change, so black and white it is! 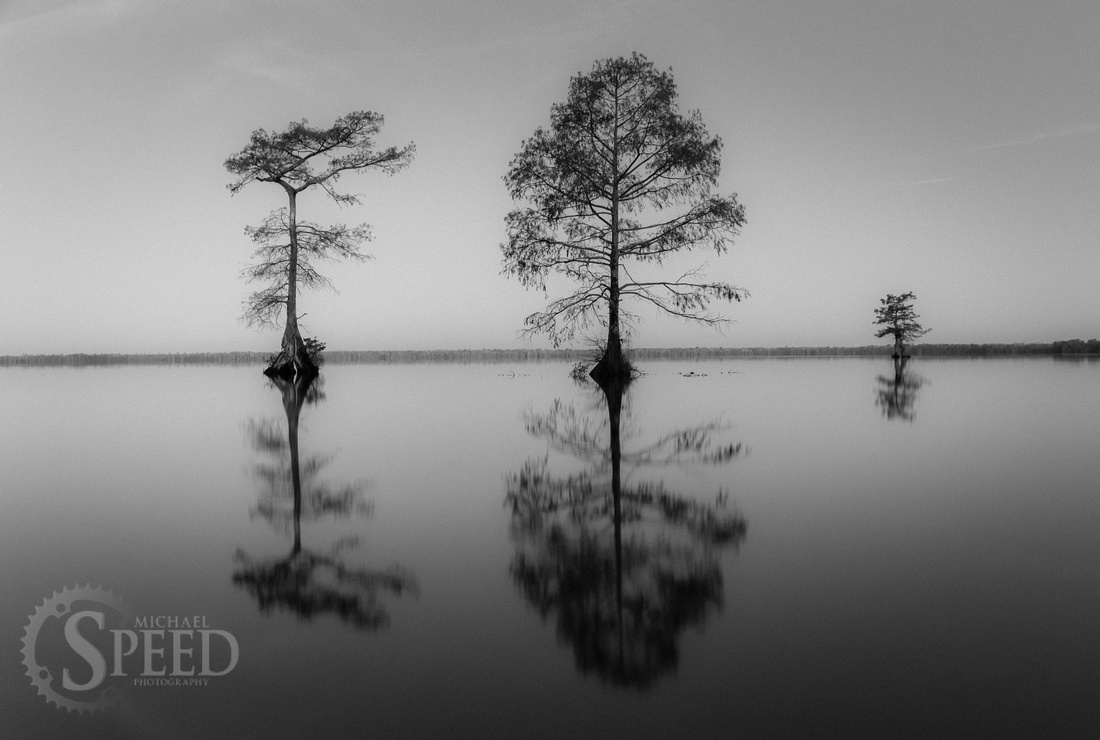 It wasn't long before the mostly clear sky showed me some really awesome earth shadow!  The reflection off of the lake made double awesome! 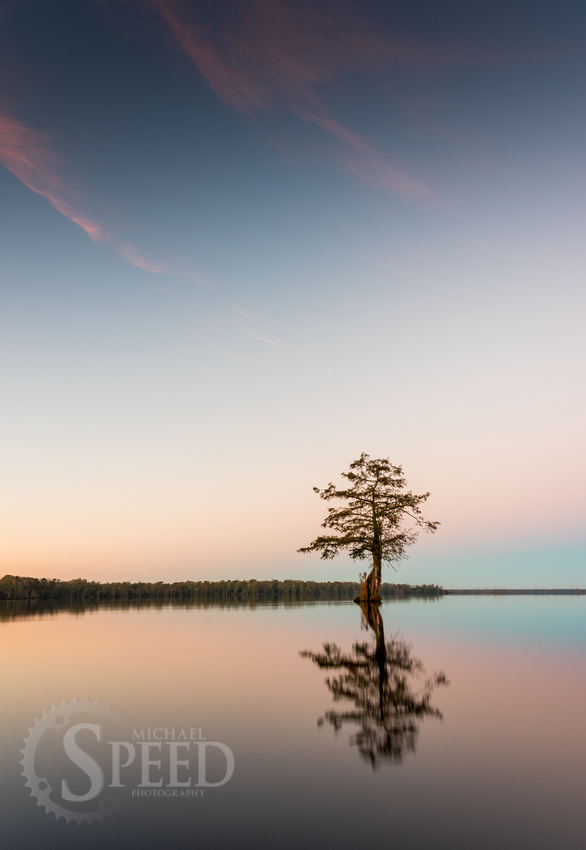 I was basically padding on a supersaturated sheet of glass, it was almost unreal. 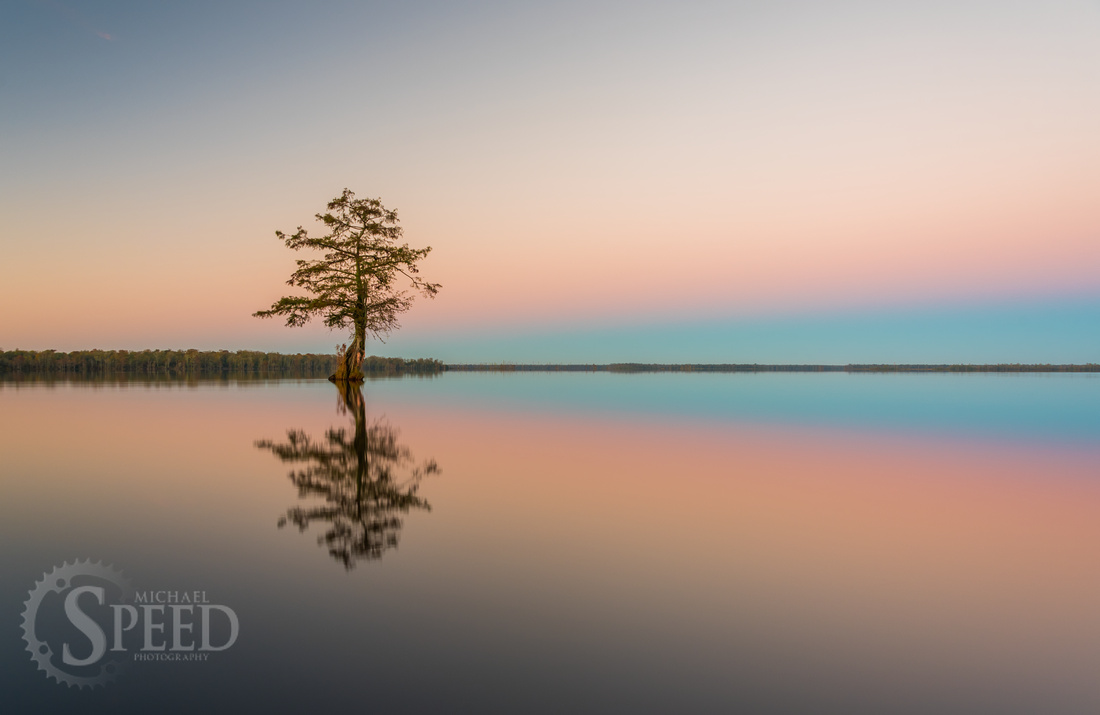 Below, you can see the tail end of the earth shadow. 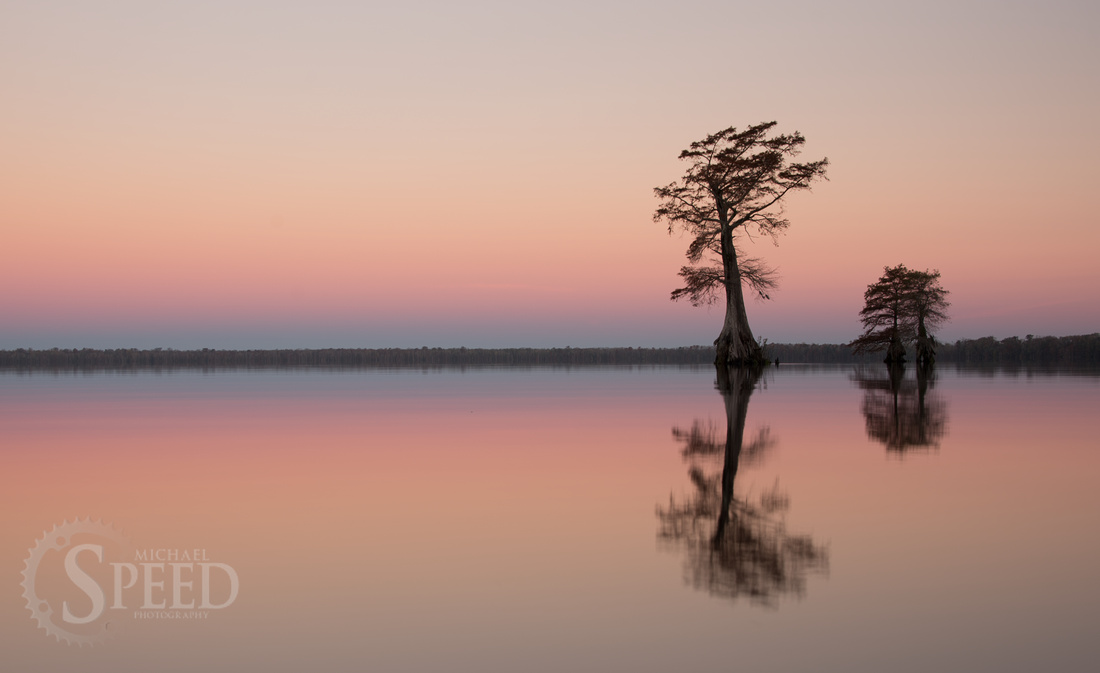 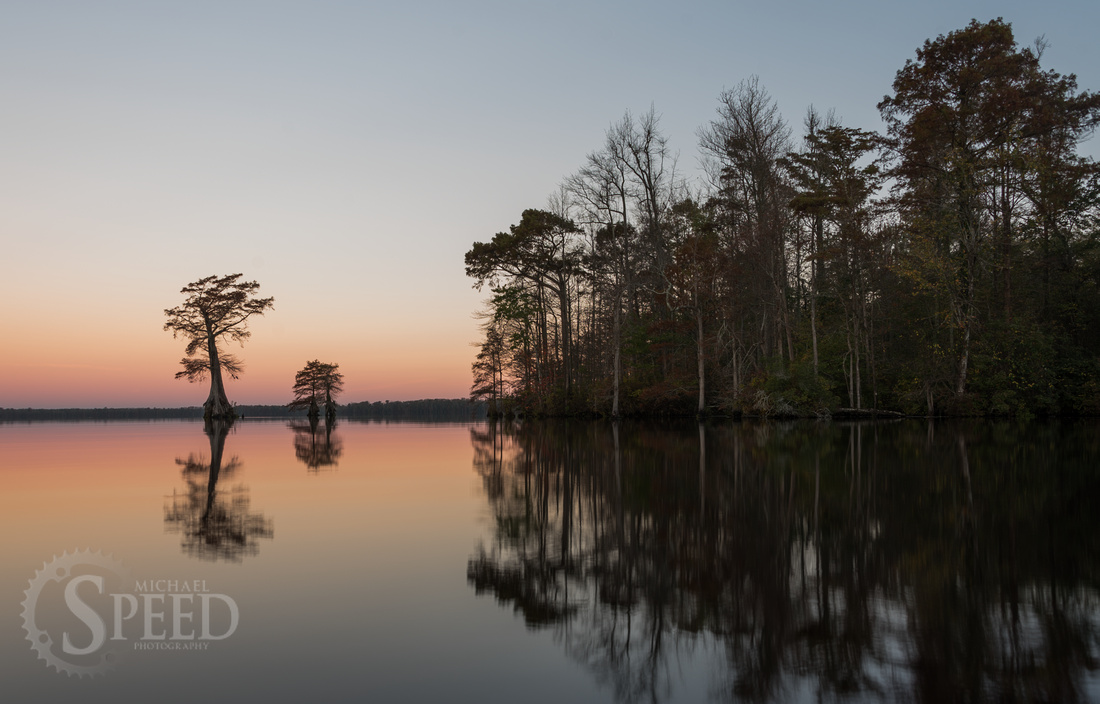 There is a large, beautiful tree not far from the entrance to the lake that really held my attention.  I waited for quite a while as the sun rose over the trees to light up the top of this particular cypress. 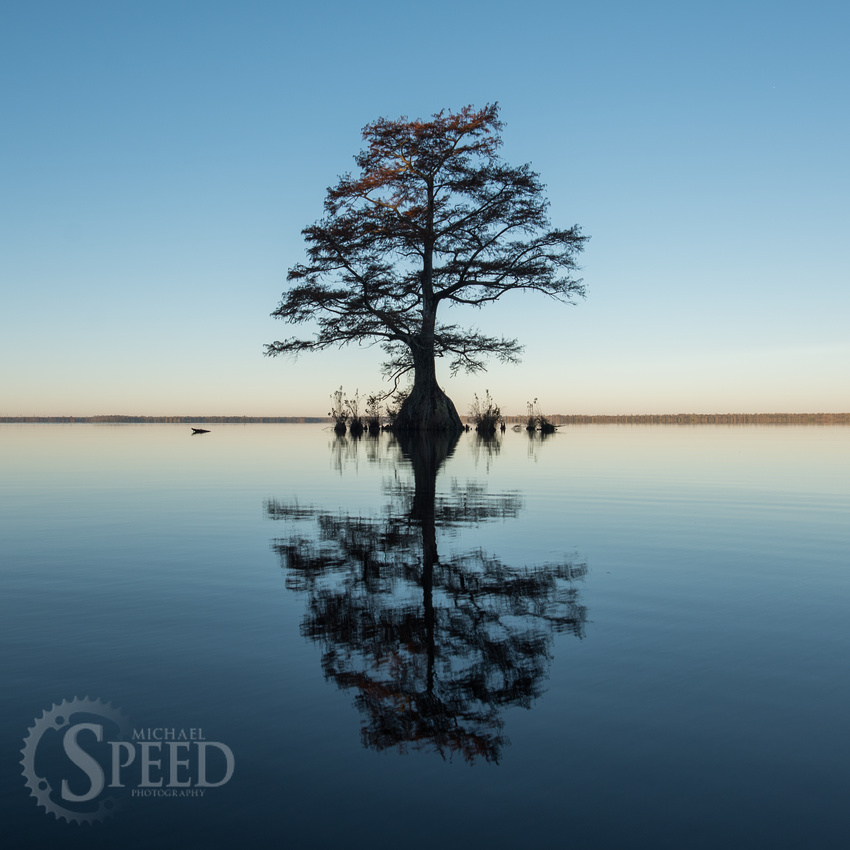 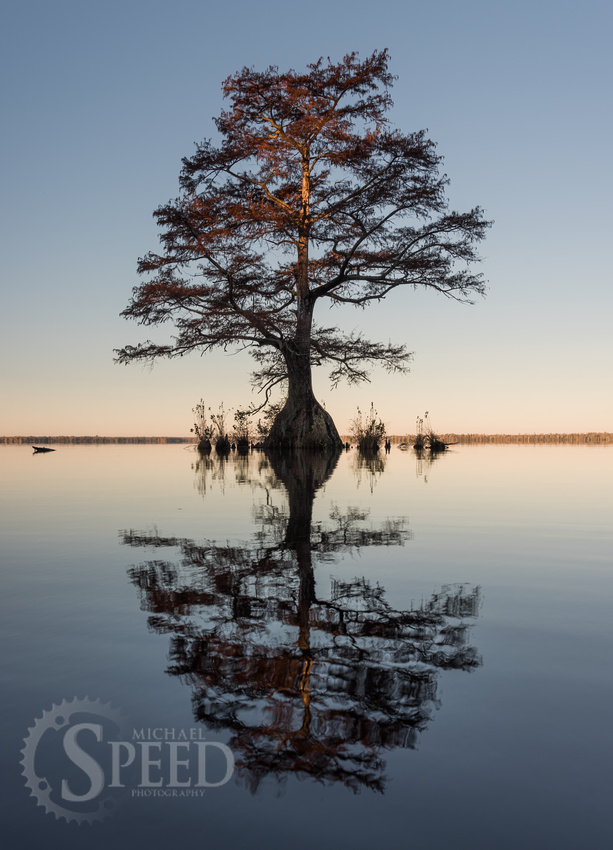 Man, I just love that tree!  I started to make my way back down the feeder ditch towards the camping area.  By now the sun was high up and lighting up the trees nicely(I am kinda surprised at how long the green stays on near the coast!) 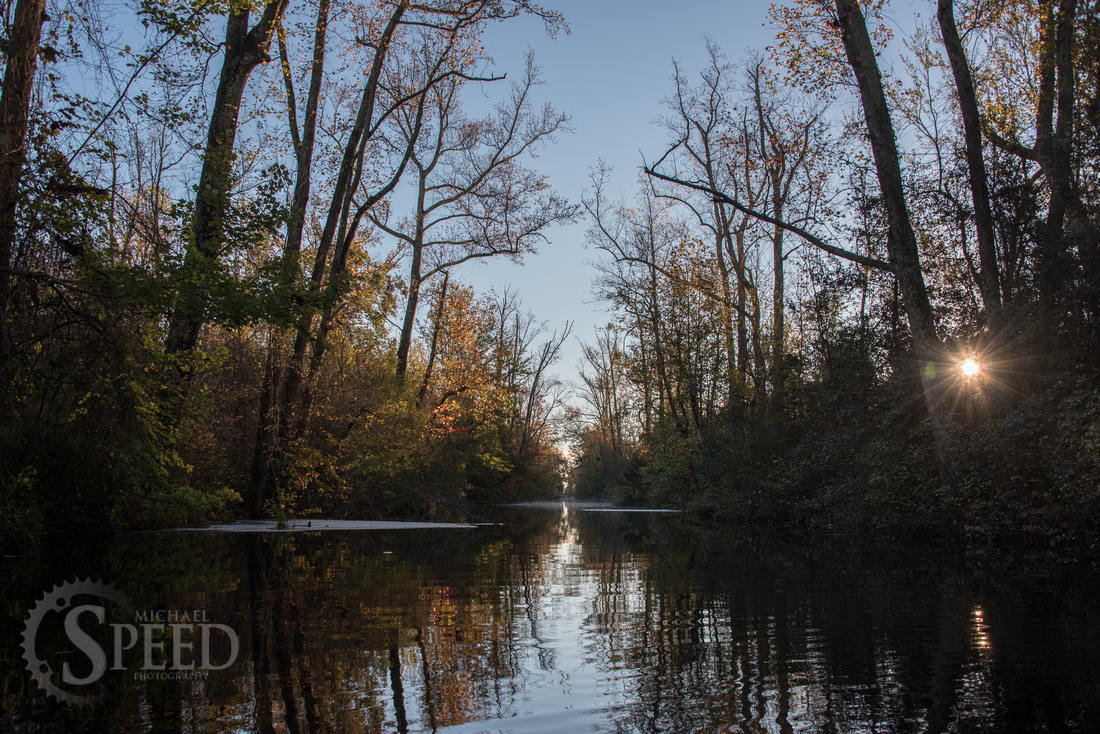 Looking back at the entrance to the lake... 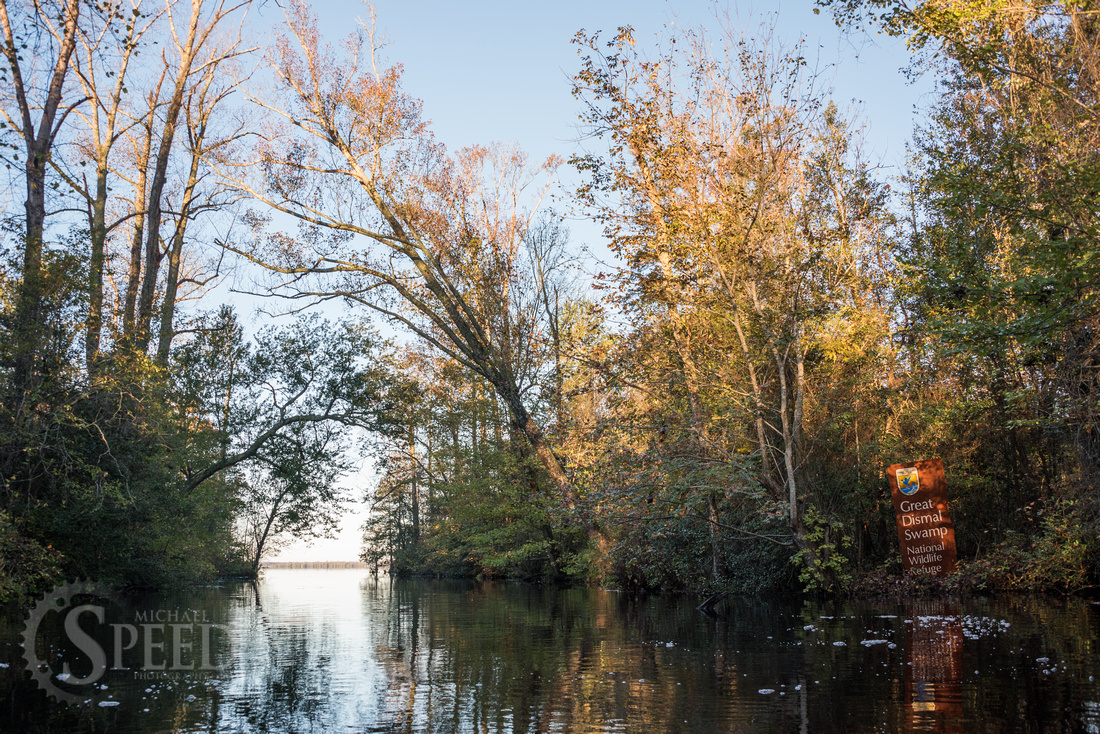 I shot a few photos of the camping area, tram, and construction area. I shot these last few photos with a rented Panasonic LX100, which is a pretty sweet point and shoot camera with a 4/3 sensor.  I have been toying around with the idea of using a premium compact or a mirrorless 4/3 or APSC camera for some things, but it looks like for now I will continue using the D750+28-300VR, as I feel it is still the best compromise of reach and image quality.  That said, I really did enjoy the LX100, it has a nice bright lens, but is just a touch too small for me, and the power zoom left a little to be desired. 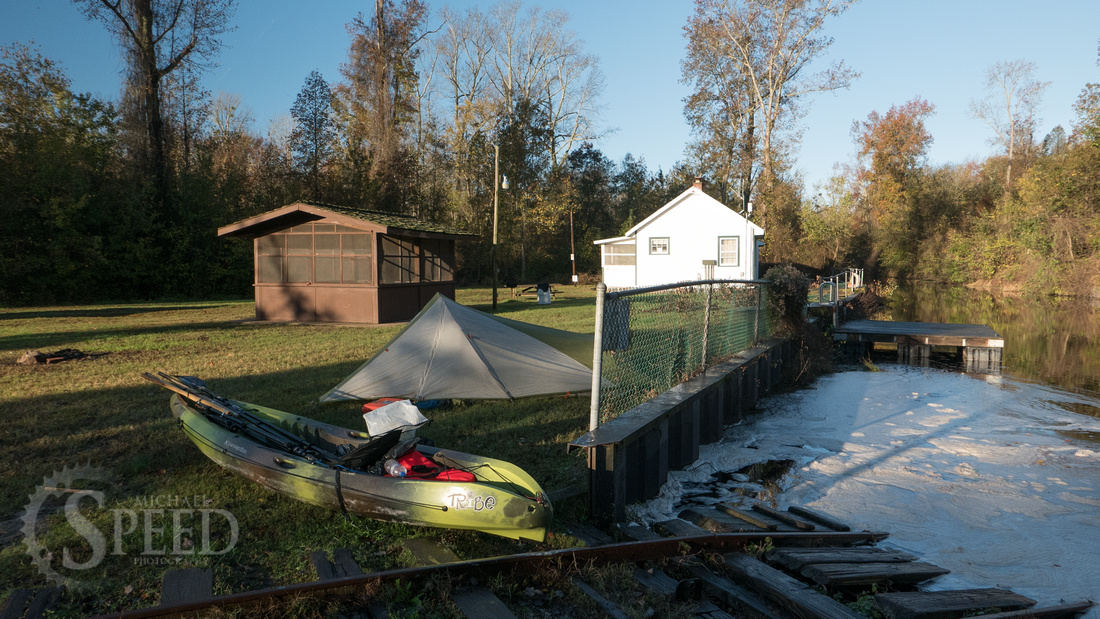 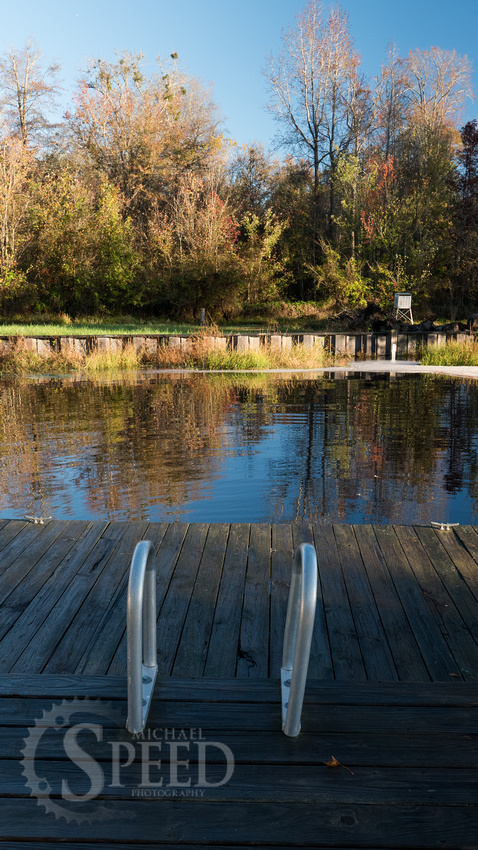 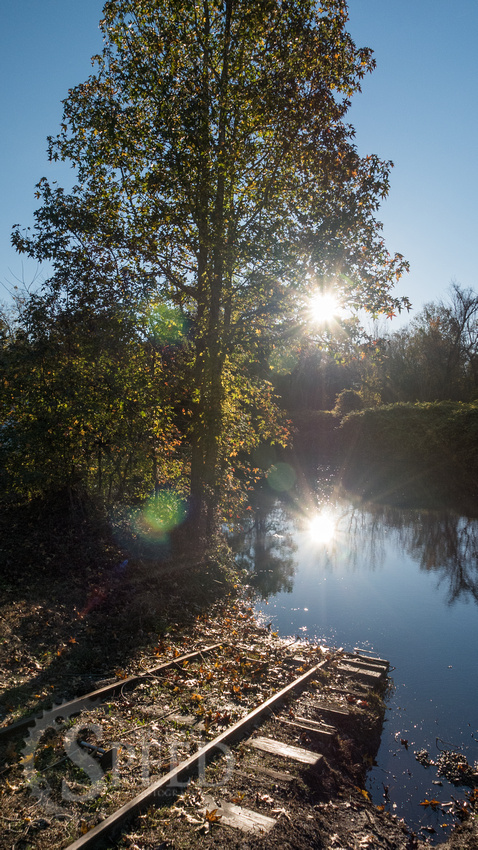 By the time I made it back to the camping area, the workers doing construction had showed up. 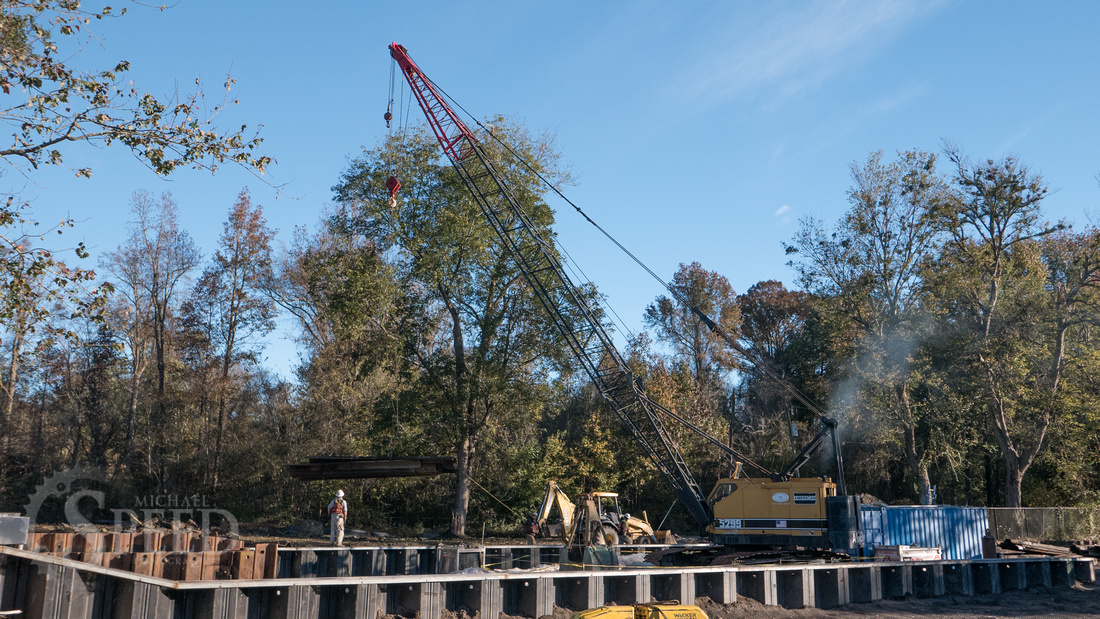 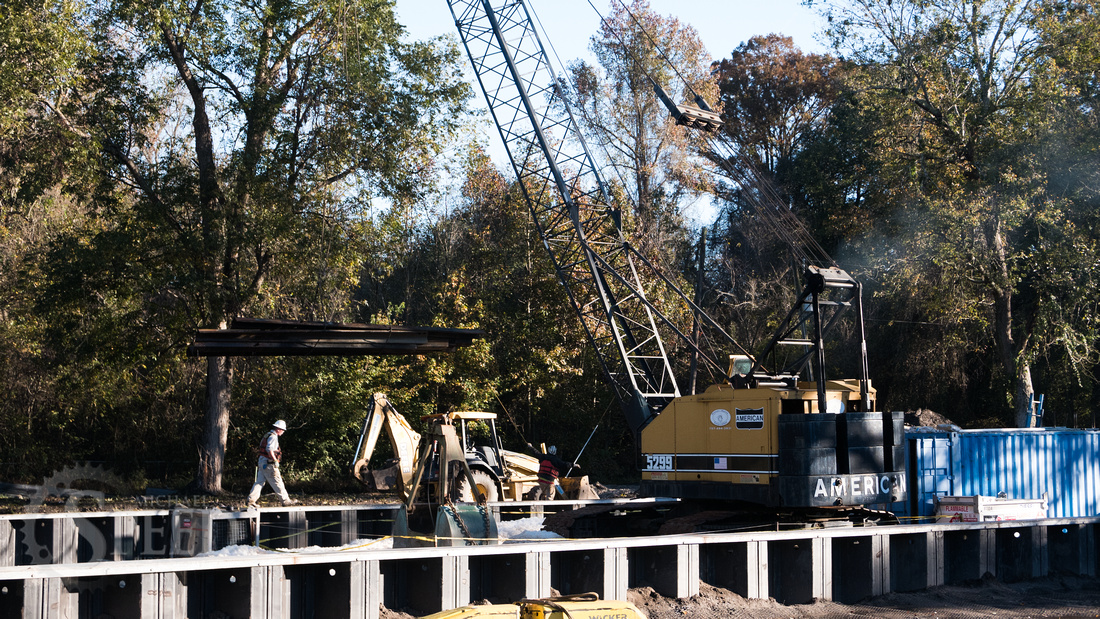 The sun shining in on the trees in the feeder ditch made from some nice reflective scenes. 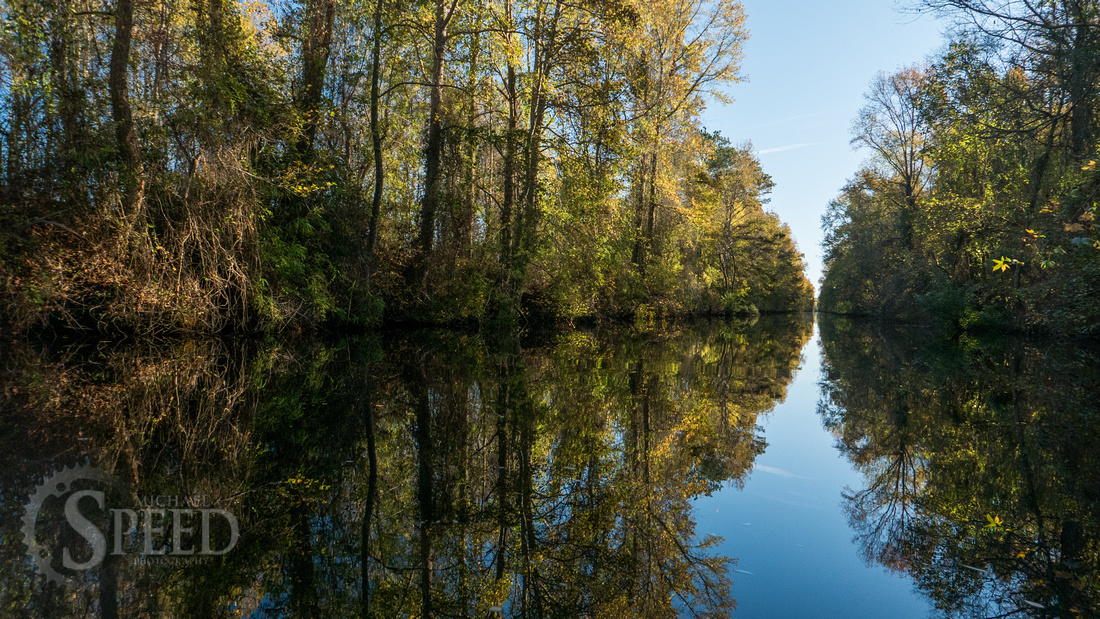 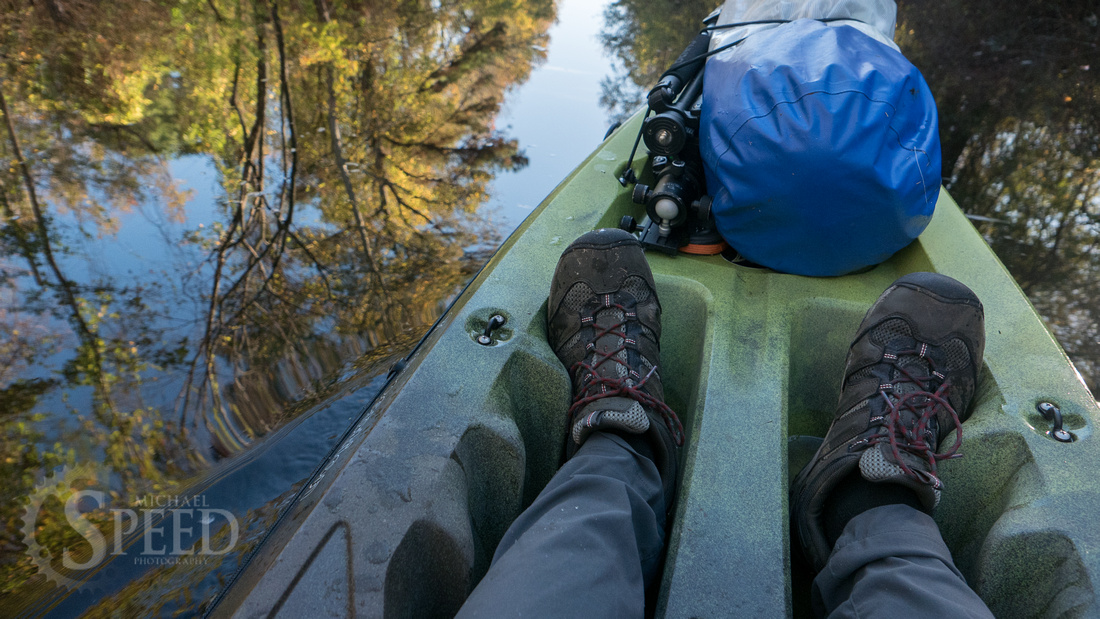 To give you a little perspective, here is a photo I took of my camera setup in the water.  The 'spider'(where the legs come together at the top) was usuualy 6-12 inches out of the water.  There were times where the spider would drop all the way down to the water level.  I would mash the tripod down into the mud at the lake bottom and make sure it was completely solid before mounting my camera. 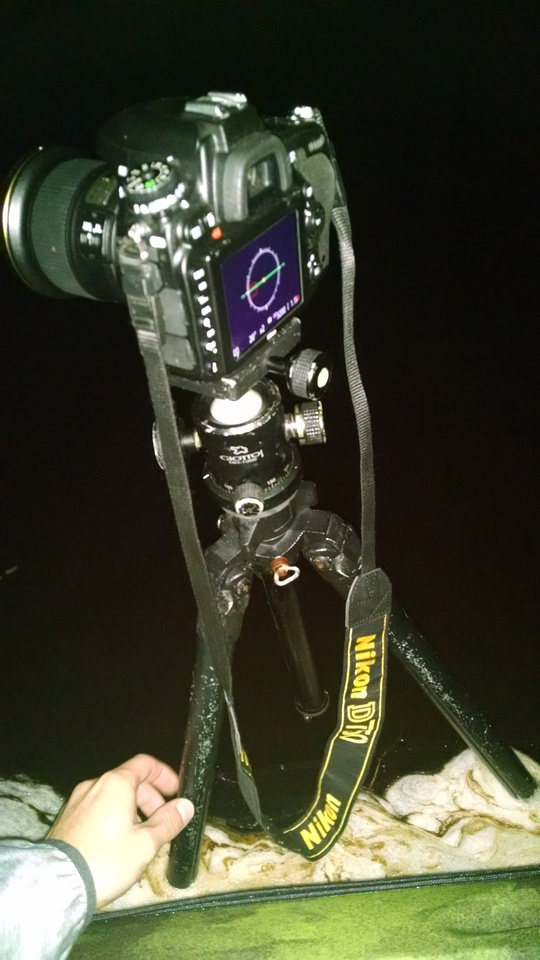 Here is the tripod with wooden dowels attached to the legs using hose clamps. Without extending the center column, it stands around 6.5ft tall, and since the lake is pretty much consistently 6 feet deep, it works! 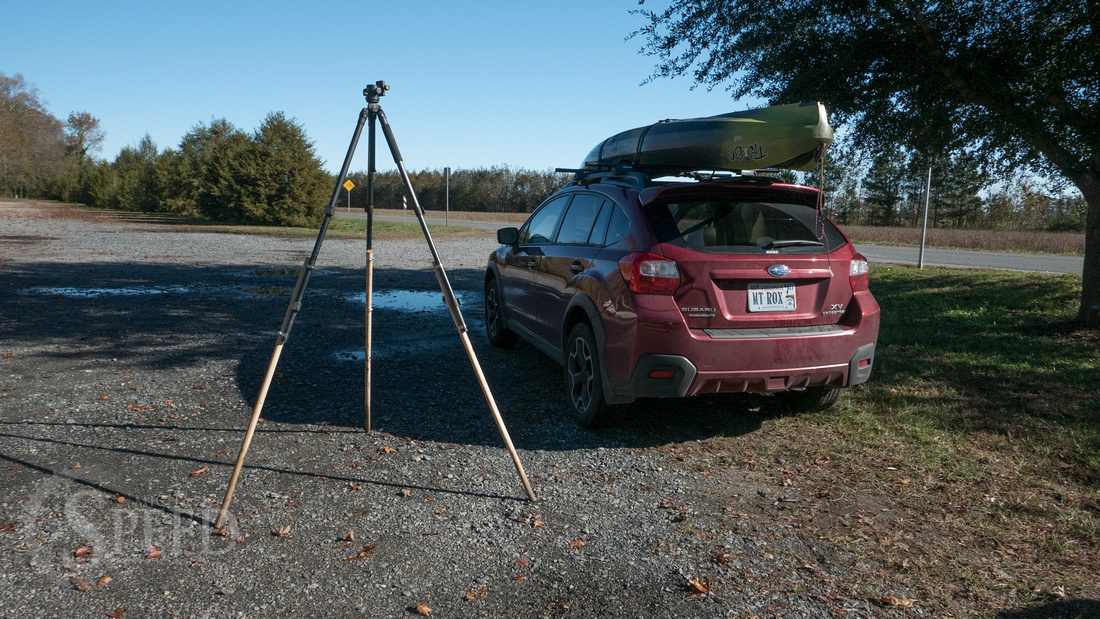 If you look at the photo with my tripod in the water, you can see that I am using an arca-type plate on my tripod.  I started using this because it allowed me to use a Peak Design Proplate to carry my camera on my backpack during my trip into the Bob Marshall Wilderness in Montana.  If I had been smart I would have switched back to my Giottos quick-connect plate, which requires no turning of knobs to lock in place(you just click it in).  At night and in the early morning hours it was sometimes hard to get the camera to slide into the plate correctly before screwing it down(mostly because I was on a boat that wanted to float away!)  Even when I had tied my boat to the tripod I found it sorta unnerving getting the plate to lock in.

It takes about an hour and ten minutes of paddling to get to the campsite.

Here is where you park:

You head south(or left) from the boat landing and turn into the feeder ditch at Arbuckle Landing.  The Feeder ditch has a big sign near it, so you really can't miss it.

There is no fee to camp.  There are flush toilets, many picnic tables, a few screened in buildings, and BBQ pits.  From what I could see, there was no drinkable water so plan accordingly.    There is power to the facility, so there are lights that are on, you know, should you arrive after dark:)

Feel free to ask any questions using the 'contact me' link at the top of the page.